By Jennifer Burnett
Almost 15 percent of Kentuckians live in households with food insecurity.

According to the U.S. Department of Agriculture, 12.3 percent of U.S. households were food insecure at some time during the year, on average, from 2015-2017. That means that these households were uncertain of having, or unable to acquire, enough food to meet the needs of all their members because they had insufficient money or other resources for food.

According to the organization’s data, Oldham County has the lowest percentage of food insecure households in the state at 8.0 percent, followed by Spencer County (9.7 percent) and Boone County (9.9 percent).

On the other end of the scale, Magoffin County has the highest percentage of food insecure households in Kentucky at 23.9 percent followed by Wolfe County (23.2 percent) and Clay County (22.7 percent). 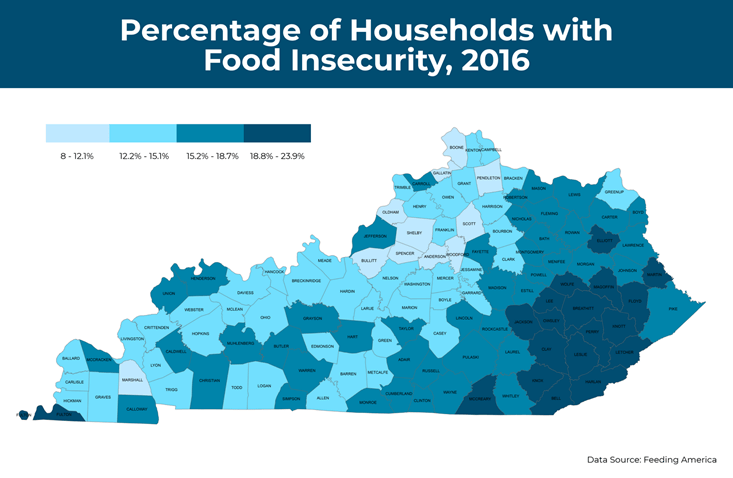 The Kentucky Department of Agriculture has launched The Hunger Initiative, a first-of-its-kind effort in Kentucky to bring together farmers, charitable organizations, faith groups, community leaders, and government entities to begin a dialogue to help reduce hunger in Kentucky.

Agriculture Commissioner Ryan Quarles has made reducing hunger in both the rural and urban parts of Kentucky a major priority during his time in office.

The Kentucky Association of Counties is proud to support The Hunger Initiative.