Milam awarded Sheriff of the Year by KSA 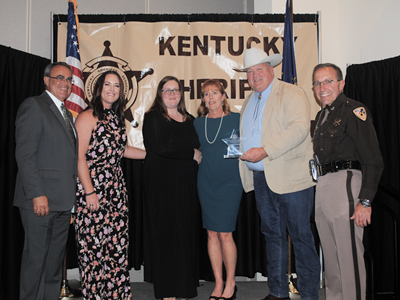 By Susan Riddell, Editor
Milam was presented the award for Sheriff of the Year by Kentucky Sheriffs' Association President John Ward.

Milam has worked in law enforcement for 33 years, previously serving as a state trooper and sergeant before taking office as the Anderson County Sheriff in 2009.

Some comments made about Sheriff Milam during his award presentation noted that he serves with honor, integrity, honesty and professionalism.

Sheriff Milam has a small office but works hard to maintain a patrol that operates 24/7. It was also noted that he has built partnerships with local, state and federal agencies, and he has deputies assigned to several different task force operations.

He has placed school resource officers in all six schools in Anderson County. Four of them are fully funded by the school system and half at the remaining two schools are school funded.

Additionally, through the fundraising efforts of his office, he has been able to make a $5,000 donation each of the last three years to the Kentucky Sheriffs’ Boys and Girls Ranch.

To view photos of more award winners from the sheriffs' conference, click here.