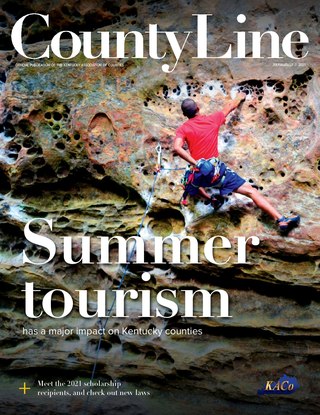 Prior to COVID-19, access to affordable broadband was a top issue for county leaders across Kentucky. Once COVID-19 hit, and counties, schools and businesses transitioned to a virtual format, the need for affordable access became even more apparent and acute.

“It’s not really unlike electricity or gas and coal-fired combustion engines,” Calloway County Judge/Executive Kenny Imes told attendees of the 2020 KACo Conference. “It’s just as essential as anything we have anymore, and not enough focus has been placed on this need. If we don’t get a handle on it soon, the problem is going to get worse and more expensive for us to catch up.”

The bill directs that no more than $50 million of that funding can be awarded before April 1, 2022.

Funding for broadband projects will be awarded based on the following criteria (in the order listed):

Funded projects will require a match of at least 50 percent of the total project cost, which can be private funds or from a city, county, urban county government or consolidated local government.

In addition, the bill directs the Public Service Commission to promulgate administrative regulations regarding pole attachments under the commission’s jurisdiction, including those necessary for the provision of broadband service, before Dec. 31, 2021.

HB382 also states the Kentucky Infrastructure Authority will oversee receiving complaints of insufficient broadband, quarterly reporting the complaints to the Legislative Research Commission and referring them to the Kentucky Attorney General, Federal Communications Commission or the Federal Trade Commission.

Unserved area - any project area where fixed, terrestrial broadband service with a minimum 10 megabits per second downstream and one megabit per second upstream is not available.